As we near the end of our OBS (ocean bottom seismometer) recovery cruise, successfully recovered OBSs crowd the deck of the R/V Sikuliaq. The last few blog posts gave research introductions and shared sights and discoveries that we encountered in the past two and a half weeks. Here I provide a few updates.

While we enjoy successfully instrument recoveries, unpredicted failures surprised us. The first week was difficult for everyone. Fortunately, we have passed those crucial challenges. We failed to receive responses from the OBS at the second site. We decided to change the route slightly, temporarily skipping the other two deep OBSs nearby and recover them at the end of our cruise. Now we have successfully recovered these sites.

During the following days recovery of the trawl resistant OBSs was also difficult. We attempted to directly lift trawl resistant OBSs using the ROV Jason, but the line tethering Jason to the OBS broke twice, probably due to strong waves when Jason lifted the TRM OBS up to the sea-surface. As mentioned in an earlier blog post, we later improved the method by sending an elevator to seafloor and using Jason as a robotic operator. Using this method, the trawl resistant OBSs were successfully recovered until the last site.

The only one exception happened during recovery of the last trawl resistant OBS. During this last recovery a spliced rope connecting the lines and the reel of elevator suddenly slipped lifting the OBS from the seafloor. The OBS was stuck on the seafloor as the line attached to it floated in the sea. In this situation, we could not send the Jason back into the sea since the current of sea without risking entanglement between Jason cable and the OBS line. After fruitlessly searching for the OBS line we finally headed for the next deep-water OBS sites, leaving the last trawl resistant OBS on the seafloor, possibly forever.

For the past week, our assignments are all deep OBSs, and 14 out of 16 OBSs were successfully recovered. The two missing sites, LD43 and LA27, were left behind after hours of attempted and unreciprocated communication. Although the deep OBSs recoveries are more common and safe than trawl resistant OBS recoveries, the recovery process is not perfect and this kind of failure is normal for all fieldwork. When you place instruments in deep ocean trenches, it is not surprising that a few fail to return. We also recovered a special instrument called a waveglider that autonomously surveys seafloor instruments. 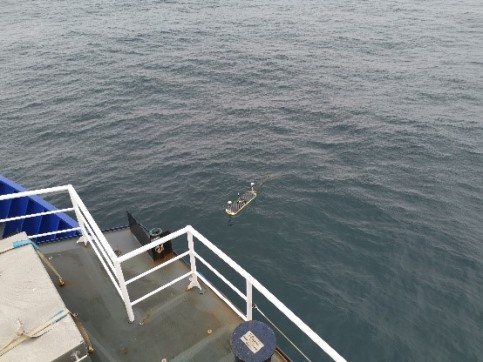 Now we are on the way back to Kodiak. I enjoyed the past weeks at sea and learned a lot. Joining the cruise will be an unforgettable experience for me. It is not only my first time to Alaska, but also my first time to sail on sea. I have never seen life on sea so closely. The occasional observations of whale and jellyfish are intriguing. I am looking forward to using the data retrieved by our cruise in a few months. At that time, every site will not just simply a name with number, but combine into a story of the geology.

Besides acquiring a lot more knowledge about OBS instruments (the seismometer, datalogger, internal/external transponder, hydrophone, etc.), I also practiced many skills of various tools from engineers. Another interesting moment is when we went up to the bridge and looking for the deep OBS on the sea surface. It is an interesting game. Sometimes we don’t know the direction of the OBS and searched for it with binoculars. Everyone wants to be the eagle eye who first spots the OBS floating on the horizon with its orange flag and light beacon.

The life on cruise is definitely great and many things are beyond my expectations. The facilities on R/V Sikuliaq are well-established, where convenient laundry room, gym, library, recreation lounge, sauna room are all provided. Most importantly, we could enjoy great meals all the time and I would miss many kinds delicious food even after I leave here. I am lucky that I have never experienced seasickness during this trip, even at the strongly shaking night.

The second leg of OBS recovery is underway by the R/V Langseth. Good luck to them!