Today is the first of three deployments of the GPSA (GPS Acoustic Transponder) project that will help measure the rate of convergence and plate motion along the Alaskan Peninsula. Measurements of plate collision provide valuable information on the processes that control the subduction of the Pacific Plate beneath the North American Plate and the locations of locked and slipping zones. Locked zones are areas of hazardous earthquake potential along the fault as these zones are prone to rupture as stress builds during collision resulting in large magnitude earthquakes.

GPSAs are placed on benchmarks that are deployed onto the seafloor in areas of interest to study horizontal motion along the Aleutian Trench:

Using the winch and the a-frame on the stern of the boat, we slowly lower it into the water and release the benchmark. It takes about fifteen minutes for the unit to reach the ocean floor. Once we’ve deployed the three GPSA receivers for an area of interest, a waveglider roves around and pings to each of the three GPSA transponders to pinpoint their locations. 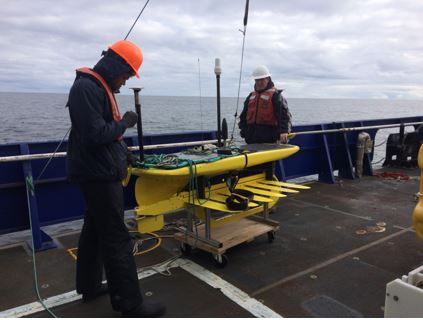 The fins below the main unit extend several meters below the ocean surface and harness the power of the waves to propel it forward. Solar panels on top of the waveglider power GPS and acoustic communication systems providing an absolute location for the waveglider and the precise position of the three GPSA benchmarks on the seafloor. 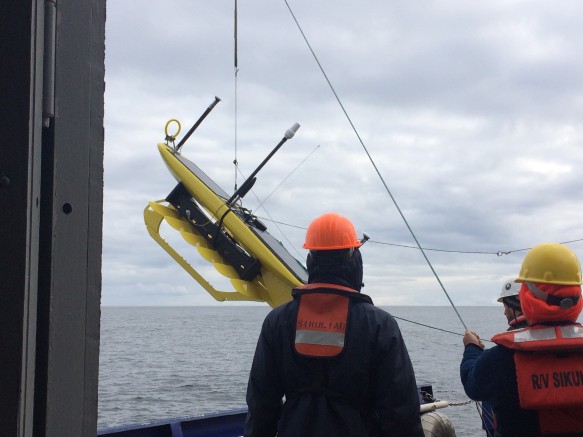 The use of GPSAs and wavegliders provides accurate measurements of absolute motion along the Aleutian Trench by acoustically determining precise station locations on the seafloor. The three stations are part of an effort to extend land-based GPS station measurements along the Alaskan Peninsula to the offshore portion of the North American Plate. The data from the GPSA project will allow researchers to determine the location of the locked portion of the fault and determine how far this zone extends seaward.

Happy Mother’s Day to all the moms reading this post!